It’s time to take another treasure hunting adventure with the avid explorer, Rich Wilde, in the new Rich Wilde and the Wandering City slot. Developed by Play’n GO, the game takes players to the Patagonia Region of South America, where the mythical Wandering City or City of the Caesars is believed to exist.

All you need to join Rich Wilde in his exploits is a spirit of adventure and a stake of between R2 and R500. The highlights of the game include Win Multipliers and a lucrative Free Spins bonus round where you can win up to 10,000x, the bet, thanks to Expanding Symbols.

Riche Wilde and the Wandering City plays out over 5 reels, 3 rows, and 243 paylines. The reel set stands in front of the fabled city, with two armed Patagonian giants standing on either side. The snow-capped peaks and slopes of the Andes, which can be seen in the background, form the perfect backdrop. The game symbols are Rich Wilde, a skull, a golden sculpture, a dagger, and playing card values A, K, Q, J, 10, and 9.

Rich Wilde is the highest paying symbol. The icon pays 4x the bet at the highest combination.

The Diamond can form winning combos on its own or substitute for the regular symbols on the paylines to complete winning lines. The icon also doubles up as the scatter, so you can land Free Spins if you get three or more in view.

How to Play Rich Wilde and the Wandering City Slot Online

Rich Wilde and the Wandering City is a simple game that players of all levels can master easily. To play the game, the first thing you need to do is set your bet by clicking on the buttons marked on the control panel. The least amount you can bet on a spin is R2, while the maximum stake is R500 per spin. 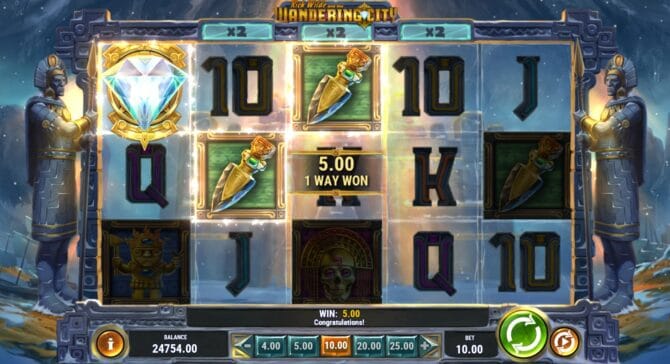 After setting the bet, you can spin the reels manually by clicking on the green button or space key. You may also opt to play automatically, using the Autoplay feature. The feature lets you pre-set 10 to 100 automatic rounds, and you can also use it to set win and loss limits.

The slot pays out when you hit three or more similar symbols on adjacent reels, starting from the left. However, Rich Wilde, skull, statue, and dagger symbols start paying at two-of-a-kind.  The highest standard payout in the game is 4x the bet, and it is awarded by a combination of five Wild Scatters or five Rich Wilde icons.

Rich Wilde and the Wandering City is a highly volatile game and its average payback rate (RTP) is 96.20%.

Free Spins: The Free Spins feature is triggered when three or more Wild Scatters appear on the reels. The bonus round kicks off with 10 Free Games, and one of the regular icons is selected to become an Expanding Symbol for the duration of the Free Spins. These symbols expand to cover an entire reel when they participate in a winning combination, and they can pay in any arrangement after expanding. You can win another ten free spins by landing three or more Wild Scatters during the feature.

Playing Rich Wilde and the Wandering City for Free

If you’re looking for a risk-free way to try out Rich Wilde and the Wandering City game, then worry no more. The slot has a demo version that you can spin for free with fun credits at most online casinos offering Play’n GO games. The free version can be played on both desktop and mobile.