Medallion Megaways is a 6-reel, 6-row video slot developed by Fantasma Games together with Relax Gaming. The game takes players to the Arabian Peninsula, giving them a taste of the rich oriental culture and a chance to discover untold riches while at it. The setting is a cozy, richly decorated tent in the middle of the desert, with beautiful Arabic music playing in the background to add to the ambience.

If you love a feature-rich game, then you should definitely try Medallion Megaways. The slot comes with a variety of bonus features including Avalanche, Free Spins, Respins, Expanding Wilds, and Multipliers. Punters can spin the title at Relax Gaming-powered casinos online for between R2 and R100 per round. The maximum potential of the game is 20,000x the bet.

Medallion Megaways plays over a grid with 6 reels and 6 rows. The game is built on the Megaways engine, which changes the number of symbols on each reel with each spin. This game mechanic also alters the number of win ways per spin.

In Medallion Megaways, for example, the number of active paylines per spin varies between 64 and 46,656. The game symbols are gems of different colours, the highest paying being the yellow gemstone. 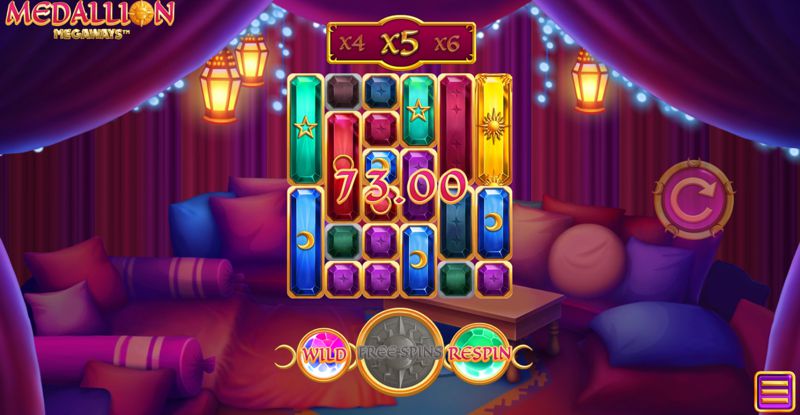 The Medallion symbol can appear after any spin in the base game. The symbol activates one of the three Feature Stones – Expanding Wild, Free Spins, and Void Respins – when it appears.

The game has a special Wild symbol, which only lands on reels 2 to 5. Wild icons can substitute for any of the standard symbols on the paylines.

Play Medallion Megaways on a device of your choice by following these simple steps.

Click or tap the Coins icon to place your bet. The minimum bet per spin is R2 and the maximum is R100.Start the game by clicking on the Spin button. You can also use the space bar to spin the reels if you’re playing on desktop.Click on the Autoplay button for automatic spins. You can pre-set 5, 10, 25, 50, or 100 automatic rounds. The feature also allows you to set win and loss limits.

To win in the game, you only need to land matching icons on at least three consecutive reels, starting from the left.

Medallion Megaways is a highly volatile slot, and its average RTP is 96.13%. However, the RTP can go as low as 96.03% when the none of the Feature Stones are activated, and as high as 96.23% when the Expanding Wild and Respin features are in play. The machine has an average hit frequency of around 28.5%.

There are four fun features in this slot game.

Also known as Cascading Wins, the Avalanche feature is triggered by winning combinations. Whenever you hit a win, the winning symbols are removed from the screen, paving way for new ones to fall from above and replace them. Each consecutive Avalanche adds a +1 Win Multiplier to the Multiplier belt on top of the reel-set.

Expanding Wilds comes into play when the Wild Feature Stone is activated by the Medallion. The feature causes Wilds to expand and cover an entire reel when they land on the screen. Expanded Wilds also have Multipliers attached to them. The value of the Multiplier varies between x2 and x6.

The feature is triggered when the corresponding Feature Stone is activated by the Medallion. When activated, the Void Respin symbol appears randomly during the spins, removing 2 to 10 symbols that are not part of a winning combination. The spaces left on the reels trigger the Avalanche feature.

Medallion Megaways is available in demo mode for players who would like to try it for free. You can also look out for free spins and cash bonuses at your favourite online casino if you’re looking for more risk-free ways to enjoy the game. Find more slot games from Relax Gaming here.