Magic Money Maze is a 5-reel, 3-row slot with the potential to churn out payouts up to 10000x the stake. As the name suggests, the highlight of the slot is a board game style bonus round that plays out on a maze-like screen. This lucrative bonus feature takes you on a treasure-hunting adventure, and the spoils are plenty for those who can stay alive until the end.

Magic Money Maze game is powered by Pragmatic Play software. Read this detailed review of the slot to learn more about its features and gameplay.

Magic Money Maze plays over 5-reels, 3-rows, and 10 fixed paylines. The reel set is embellished in gold and cast against a dark blue backdrop, with banknotes and coins in the background.

The premium symbols in the game are four past presidents of the United States, namely Abraham Lincoln, Alexander Hamilton, Benjamin Franklin, and George Washington.

The highest paying of these symbols is Abraham Lincoln with payouts worth 0.5x, 5x, 20x, and 200x the bet for combinations of 2, 3, 4, and 5 icons, respectively. The lower symbols are Ace, King, Queen, Jack, and 10 royal cards. 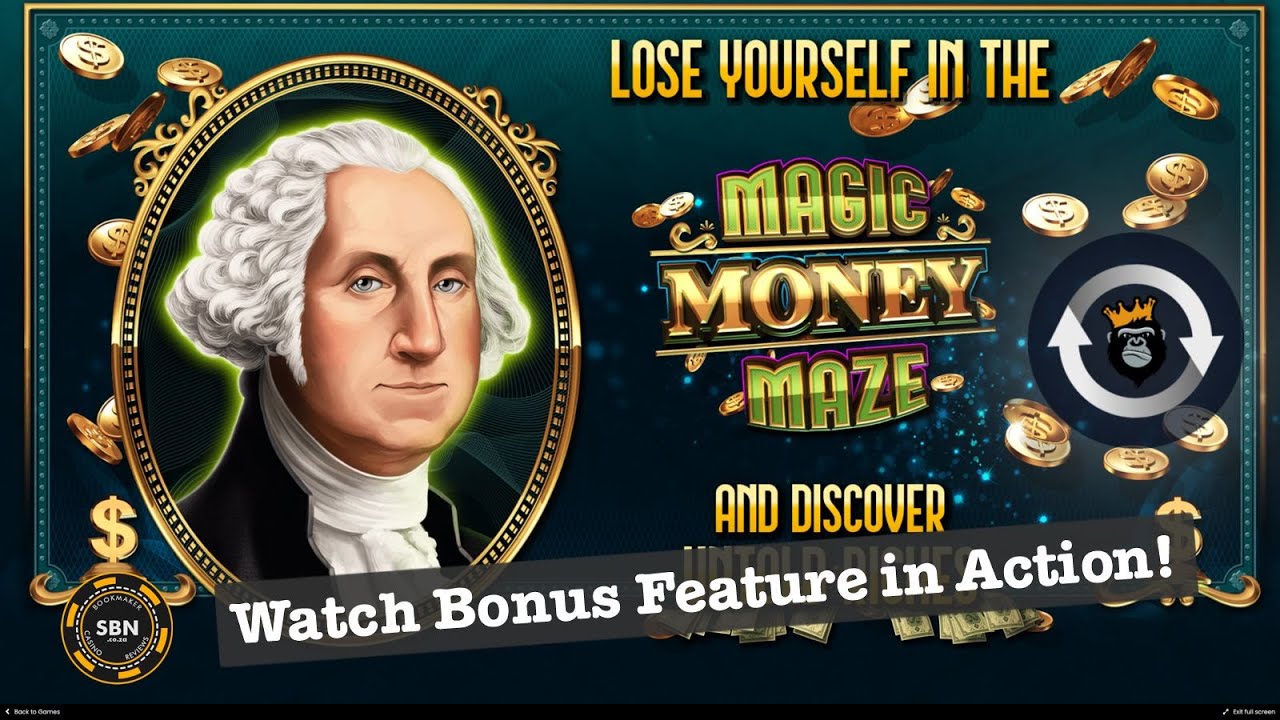 The money symbol depicts a random value of between 0.1x and 1000x the bet. The icon awards payouts of 3x and 15x the bet for 3 and 4-of-a-kind, respectively. When five money symbols land on a payline, you get a payout equal to the sum of the values depicted by the icons.

The Magic Money Maze logo is the bonus or scatter symbol. Getting three or more of these icons in view are all you need to unlock the bonus round.

Magic Money Maze slot is optimized for all types of devices, including iOS and Android smartphones and tablets. Follow these easy steps to play the game in demo mode or with a real balance at your favourite Pragmatic Play online casino. Magic Money Maze Slot GameClick on the information tab to familiarize yourself with the pay table and game features.Set your bet by clicking on the +/- icons placed next to the spin button. The minimum bet is 0.10 and the maximum is 250.00.Tap or click on the spin button to set the reels in motion. Alternatively, you can use the Space key if you’re playing on the desktop version.Use the Autoplay function to set 10 to 1000 auto-spins. The button also allows you to activate quick spin and turbo spin modes.

Payouts are awarded when you land three or more matching symbols on a payline, starting from the leftmost reel.

The Magic Money Maze mini-game is the main bonus feature in this game. The bonus is triggered when you land three or more Scatters in view. The number of triggering symbols determines how many extra lives you have at the beginning of the round.  3, 4, and 5 scatters award 1, 2, and 4 lives, respectively.

This maze-style mini-game plays out on a screen with a 7×7 grid layout. The objective of the game is to win a coin bonus by moving the gorilla king icon around the maze. The number of moves you make is determined by the dice in the bottom-left corner.

The tiles can display one of the following symbols:

Money symbol: The icon depicts random cash values ranging from 0.1x to 1000x the total bet.Heart: The heart symbol adds you an extra life. You can collect up to three extra lives during the feature.Arrows: It moves you to the position shown by the arrow.Snakes and scorpions: Landing on a square with a snake or scorpion decreases your life by one.President: The presidents’ portraits sit at the corners of the board. Collecting 2, 3, or 4 portraits boosts your total payout for the round by 2x, 3x, and 10x, respectively.Magic Money Maze: This symbol sits at the centre of the maze. The value of the money symbols is doubled the first time you land on this square.  The multiplier increases progressively each time you make it to the middle tile.

The feature ends when you exhaust your lives.

This is a handy feature for those who prefer to dive right into the Magic Money Maze bonus round. You can use it to purchase the bonus for 120x the stake. The feature may not be available to players in some jurisdictions like the UK.

The RTP of the slot is a solid 96.61% when the buy bonus feature is activated. The volatility of the machine is in the medium to high range.