For starters, six paylines span the slot’s five reels, and the game has an overly generous RTP rate. It may utilise generic football imagery, but this Habanero slot does come with a selection of special features to boot. You wouldn’t ordinarily expect to see them in such a game. If that intrigues you, you can find out more about what Knockout Football Rush has to offer in our slot review.

Knockout Football Rush doesn’t make itself overly challenging. The Habanero slot features a 3×3 reel structure, and that means you’re only betting on three reels in total. However, six paylines span those three reels. You won’t be able to alter the vertical or horizontal lines occupying the square set of reels, but you can alter your stakes. These rise upwards from a floor of just 0.10. Knockout Football Rush is ideal for high rollers, too, with bets rising as high as 2,000.00 if you’ve got cash to splash on this bizarre little slot. 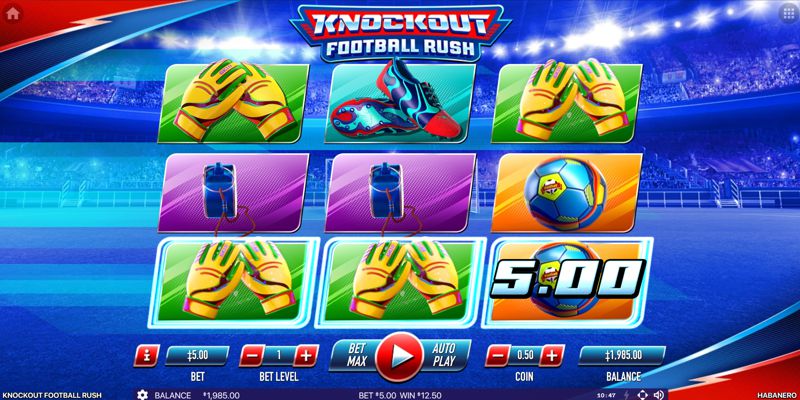 Regarding gameplay, Habanero has ensured that Knockout Football Rush is something of a highly volatile game. The game makes up for this by ensuring that as much as 14,400x a bet is up for grabs. Aside from the non-progressive jackpot, it is worth noting that the RTP rate is exceptionally favourable here, sitting at 96.80%. That’s above average for these types of online slot machines.

There really aren’t too many features for you to get involved with here. However, we’d still argue that there are more than a conventional classic three-reel slot. As with virtually any slot, a win is formed by landing three identical symbols on a payline, either vertically or horizontally. To help you achieve this, the slot machine software developer has also worked a wild symbol into the mix.

This wild symbol can only pop up on the third row of symbols. It is easy to spot, as it is the one running across the bottom of the screen. From there, the wild symbol can become sticky and will then start to climb upwards on the next spin, and so on.

The more wilds you manage to land on the reels, the longer this feature will go on. Once no new wilds appear (and existing wilds disappear), this good fortune comes to an end. Anything you might win during this round could potentially be rewarded with a multiplier, too. Here, the multiplier might rise from 4x (for six to eight wilds) up to 60x (if all nine spots have wilds on them).

Penalties are often deemed to be a game of luck. Either lady fortune is with you, or she isn’t. This also applies to the Knockout Football Rush slot. At any point in the game, this randomly triggered bonus may begin. If so, you could potentially find another pathway to landing 60x multipliers.

There are many football-themed slots out there, so Knockout Football Rush has had to do something different to make itself relevant and stand out from the crowd. The way that this game has chosen to present itself won’t appeal to everyone. However, with randomly triggered goodies, sticky wilds and multipliers woven into the 3×3 reel design, we’d say that Knockout Football Rush has all the elements to make itself a likeable if bizarre slot.