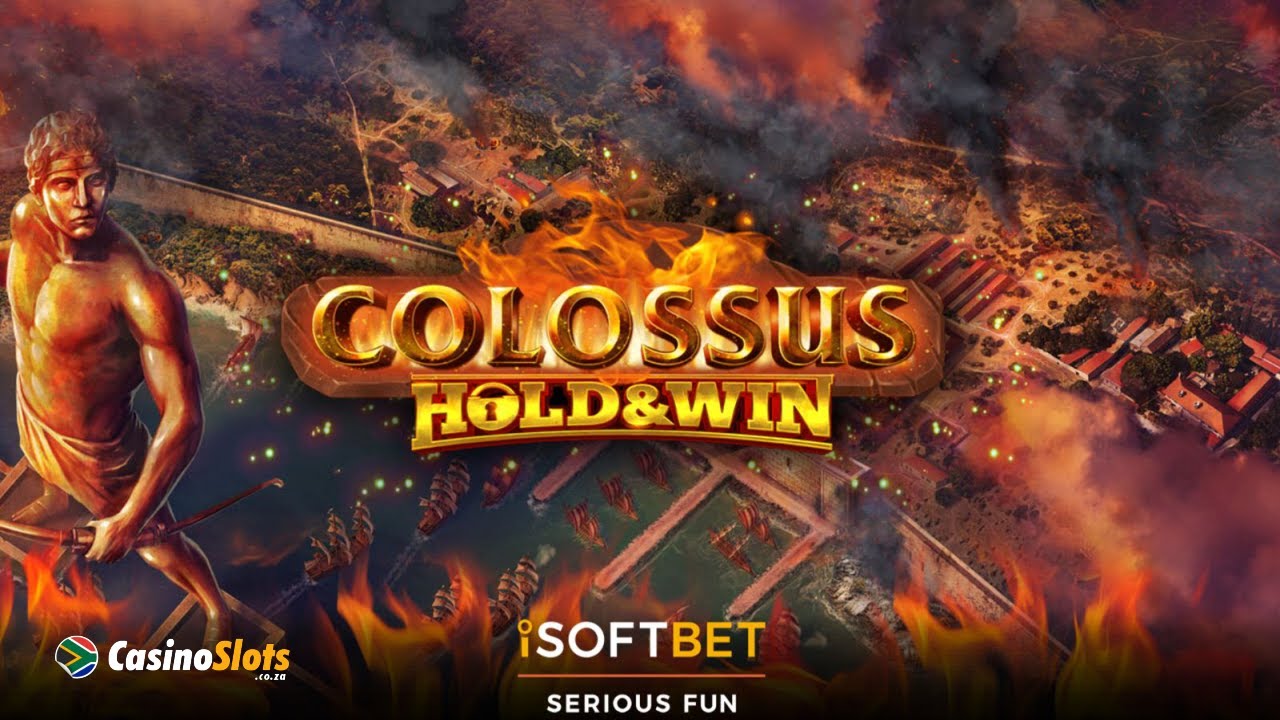 Playable across all devices, Colossus: Hold & Win is among the latest additions to the fast-growing Hold & Win series of video slots by iSoftbet.

As the name suggests, the game is inspired by the famous Colossus of Rhodes statue, a gigantic figurine of the Greek sun-god Helios that towered over the ancient city of Rhodes. The height of the Colossus is estimated to be at par with the Statue of Liberty, and it was one of the Seven Wonders of the Ancient World.

Colossus Hold & Win comes loaded with many features to boost your chances of walking away with decent payback. Punters who play this game can look forward to Expanding Wilds, Wilds Multipliers, and a sizzling Hold and Win Respin bonus game. Players also stand the chance to win one of three fixed jackpots during the Hold and Win Respin feature, the highest being a cash prize worth 10,000x the bet.

Colossus Hold & Win is a beautifully crafted masterpiece with colourful and high-quality graphics. The game plays over a grid with 5 reels, 3 rows, and 20 solid paylines. The reel-set is cast against the backdrop of the picturesque city of Rhodes, and the statue of the mighty Helios can be seen standing on the left side of the grid. 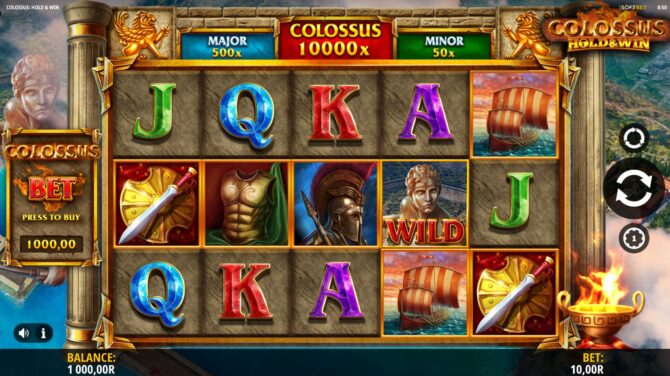 The pay table of the slot is made of two sets of symbols; lower value icons and upper symbols. The lower symbols are A, K, Q, and J royals while the upper symbols are a ship, a sword, armour, and a helmet. The highest standard win is 20x the bet, and it is awarded when five helmet symbols align on a payline.

The Colossus symbol is the Wild card in the game. The icon appears on reels 2, 3, 4, and 5 only, and it can substitute for any of the regular symbols on the reels to complete winning lines.

The bonus or scatter symbol in Colossus: Hold and Win is the Gold coin. It is the symbol that unlocks the Hold and Win Re-spin bonus game.

How to Bet & Start Playing

Colossus: Hold & Win is a straightforward game with clear-cut rules and a simple betting system.

The slot provides players with a range of betting options that vary between €0.01 and €1.00 per line, which means that you can stake as little as 20p and as much as €20.00 per round.

When you’re done with placing your bet, you can dive right into the gameplay by pressing the Spin button. Right above this button is AUTO SPIN, which allows you to set 5 to 1000 automatic rounds as well as set loss and win limits.

iSoftbet rates the volatility of Colossus: Hold & Win as high level. The theoretical return-to-player (RTP) of the slot is 96.0%, which is at par with the industry standard. The hit frequency of the machine is approximately 37.2%. During the base game, the probability of triggering the Hold and Win Re-spin bonus is 1 in 182 spins.

The flaming goblet on the right-hand side of the board awards a random Multiplier with a value of x2, x3, x5, or x10 when an Expanded Wild land on the reels. The Multiplier is applied to all wins formed thanks to the Expanded Wild symbol.

This is the highlight of the game. The feature is triggered when at least six Gold coins land in view. When triggered, the coins will rotate to reveal a value, and you will receive three Respins with the coins in place. The object of this bonus game is to fill all reel positions with Gold coins.

When a Gold coin lands during the feature, it also become sticky and the number of re-spins is reset to three. You can also receive random x2, x3, x5, or x10 Multipliers during the round. The Multipliers are applied to the values depicted by the coins.

The feature ends when you run out of re-spins.

The Colossus spin is a final spin awarded when you fill all reel positions with Gold coins during the Hold & Win bonus game. You can win one of these three fixed jackpots after the spin:

Players can use the buy bonus feature to purchase the Hold & Win Respin mini-game for 100x the bet. However, the option may not be available to players in some countries, like the United Kingdom.