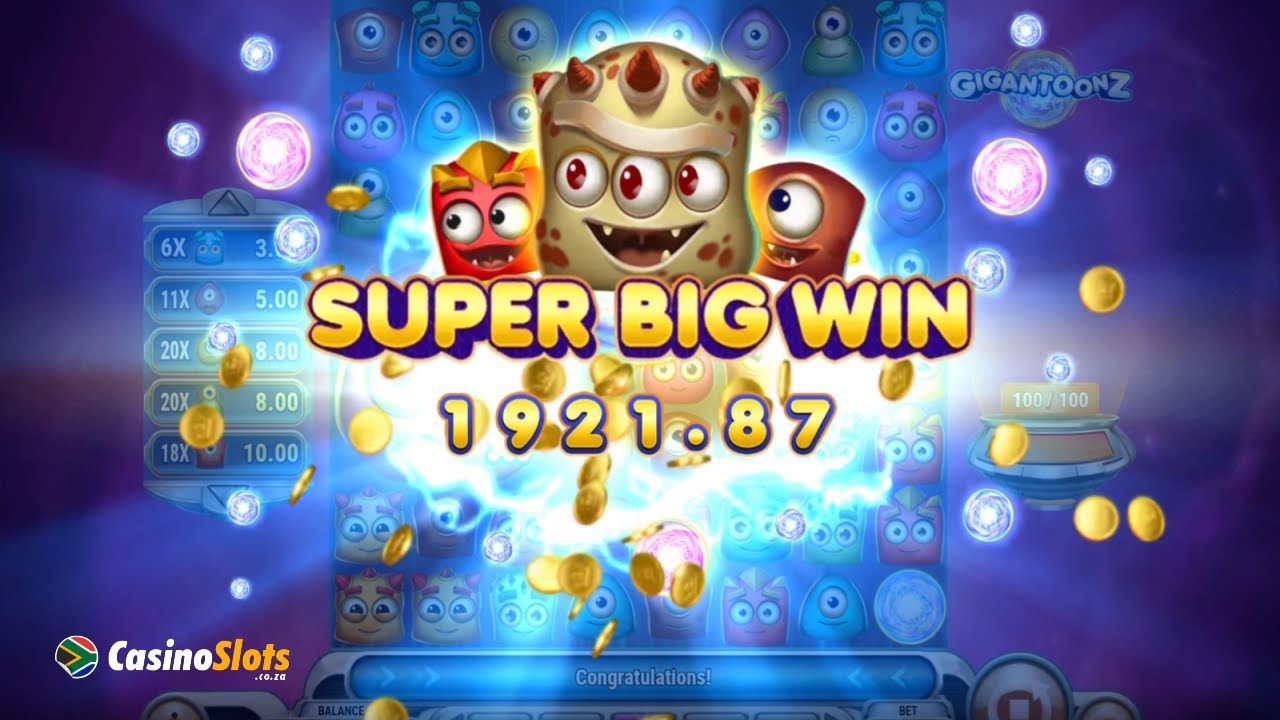 Gigantoonz is a space-themed video slot by Malta-based games developer Play’n GO. The title is the latest instalment in the Toonz series of slots, which also features Reactoonz, Reactoonz 2, and Dr. Toonz.

Those who have played the prequels will notice that Gigantoonz is very similar in design to the previous titles, and the wagering mechanic is pretty much the same. However, the game grid has been upgraded from 7×7 to 8×8 in Gigantoonz, and the developer also made some adjustments to the maths model.

Read our detailed review of the slot to find out what you should expect when playing the game online.

Just like the previous instalments, the Gigantoonz slot is built around the theme of space and extraterrestrial beings. The game plays out on a grid with 8 reels and 8 rows. To the right of the reel-set is a Quantumeter, which activates four different modifiers when fully charged. A second meter, which displays the number of symbols in each winning cluster, sits on the left side of the screen.

When it comes to the pay table, the reel symbols in Gigantoonz are animated aliens. The aliens with one eye act as the lower symbols, while those with two eyes act as the premium symbols. The machine uses a Cluster Pays engine, which means that you have to form clusters of matching symbols to form a win. The minimum number of icons required to create a winning cluster is 6.

Quantum Wilds can substitute for any of the regular symbols on the reels to form winning clusters.

These are special Wilds that only come into play when the Quantumeter is fully or 100/100 charged. 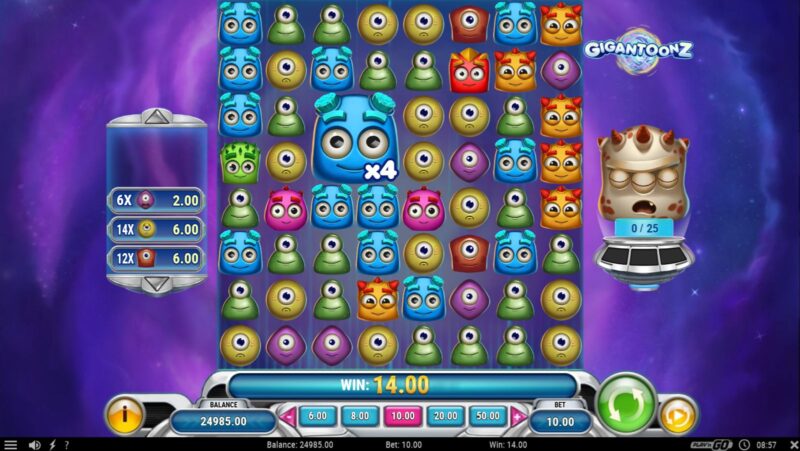 How to Play Gigantoonz Slot Online

Gigantoonz may appear complicated, but it is easy to learn, even for beginners. Here is a step-by-step guide on how to play the slot.

Click on the -/+ controls on the dashboard to set your bet. The cost per spin of the game varies between R4 and R1,000.Press the Spin button to fire up the reels. You can also use the Space bar to spin manually if you’re playing on PC.For automatic spins, click on the Autoplay button and select 10, 20, 50, 75, or 100 auto-spins. You can also set win and loss limits using this feature.For the pay table, click on the information or (i) icon.

Gigantoonz has a theoretical RTP of 96.25%, although some versions of the slot have a lower payback rate. The volatility rating of the machine is 10 out of 10, which makes it a highly volatile game. Games with this maths model do not hit often, but the wins are decent when they come by. Highly volatile slots are ideal for players with a big budget.

Gigantoonz slot game has a number of different slot features.

The feature removes all winning symbols from the reel-set, making room for new ones to fall into their place. This goes on until no new winning cluster is formed.

The regular symbols may appear as giant symbols. The size of these Mega icons varies between 2×2 and 7×7.

All Mega symbols have a random value of attached to them. These values boost the charges collected on the Quantumeter when the Mega symbol forms a winning cluster. The Cluster values ranges between x2 and x13.

The feature adds 5 to 10 Quantum Wild symbols randomly to the reels, increasing your chances of forming a winning cluster.

The Quantumeter sits to the right side of the game board, collecting charges from winning clusters each time you form a win. Filling the Quantumeter activates the following modifiers:

What is the Maximum Payout in Gigantoonz?