Brace yourself for another wild adventure with Pragmatic Play in the Western-themed Black Bull slot. The game is set in the American West, with black bulls and other animals of the Western prairies taking centre stage. The maximum potential of the slot is capped at 4500x the bet, and its volatility is rated high.

In terms of extras, Black Bull is packed with an array of bonuses such as Wild Pays, Free Spins, and a Money Collection feature. Discover how you can use these features to your advantage in this review.

The Black Bull slot is built around the theme of bull riding, a popular rodeo sport mainly associated with the cowboys of the American West. The action unfolds on a grid with 5 reels, 4 rows, and 20 paylines. The game board is placed at an arena entrance, and you can see cliffs, rocks, and desert plants in the background.

The standard characters in the game are the black bull, wolf, eagle, ram, lizard, and the four royalty cards – Ace, King, Queen, and Jack. The black bull is the highest paying of these symbols. It pays 2.5x, 7.5x, and 25x the bet for three, four, and five-of-a-kind, respectively.

The money bag is the Wild card in the game. The symbol can form winning combinations on its own or by substituting for the regular characters on the paylines.

The Money symbol can appear on any reel during the base game or Free Spins. The free games feature is unlocked when you land six or more Money symbols in the paid game.

The Black Bull slot is playable across all devices for between R3 and R1,500 a spin. The machine features 20 paylines, meaning you can wager as little as R0.10 or as much as R7.50 per line.

Follow these easy steps to play the slot on you desktop or smartphone.

Click on the information (i) icon to view the pay table and game rulesChoose your stake by clicking on the controls marked -/+. The bet per spin is displayed below the balance.Hit the Spin button, Space key, or Autoplay to start spinningIf you opt to spin manually, you can increase the pace by activating Turbo Mode and Quick Spin Mode. Both features are found under Autoplay.

Wins are formed when three or more matching symbols line up on a payline, starting from the leftmost reel. 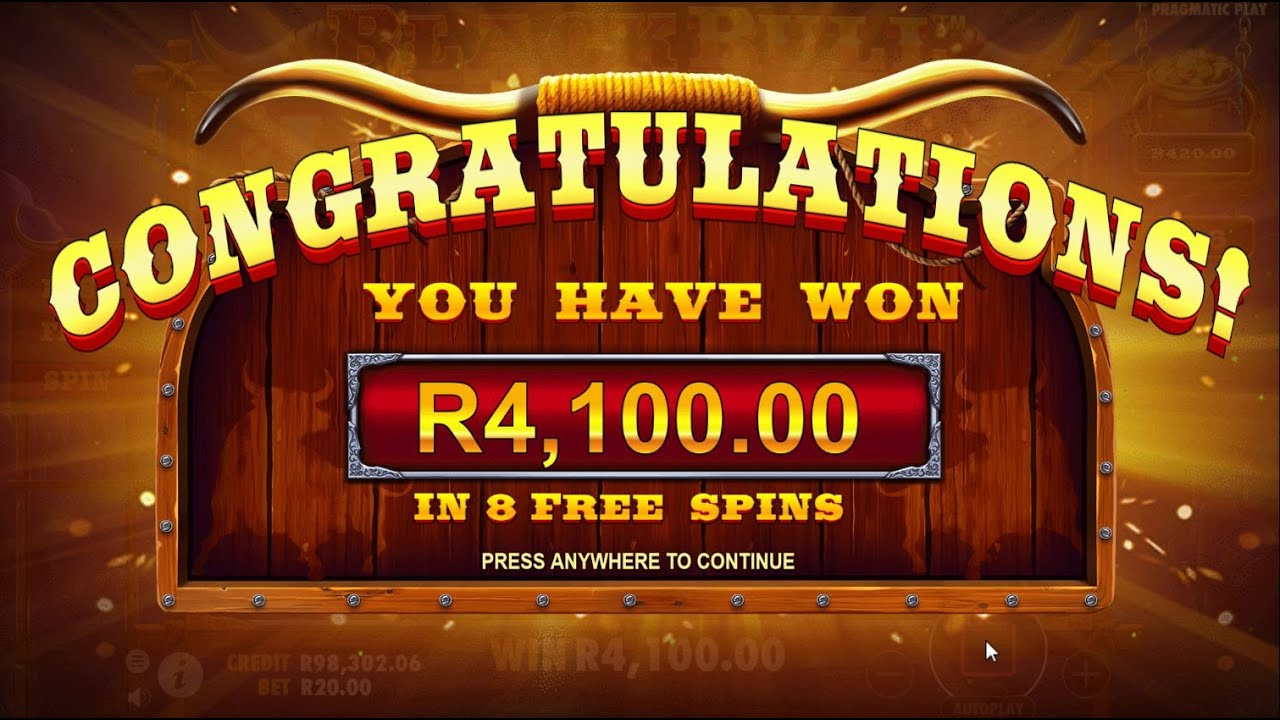 The Wild pays at the same rate as the black bull when you align three or more wilds on a payline.

The Wild collects all Money symbols whenever both icons appear on the same spin. When this happens, the total value depicted by the coins is added to your balance.

The Free Spins round is unlocked when six or more Money symbols land in view. The bonus games are credited as follows:

The buy bonus feature allows you to trigger the free spins round instantly. The cost of purchasing the bonus is 75x the bet. The option may not be available to players in jurisdictions like the UK due to regulatory restrictions.

The Black Bull slot has a volatility rating of 4.5/5.0, which makes it a highly volatile game. The theoretical RTP of the game is a solid 96.51%, which is well above the industry standard of 96.00%.