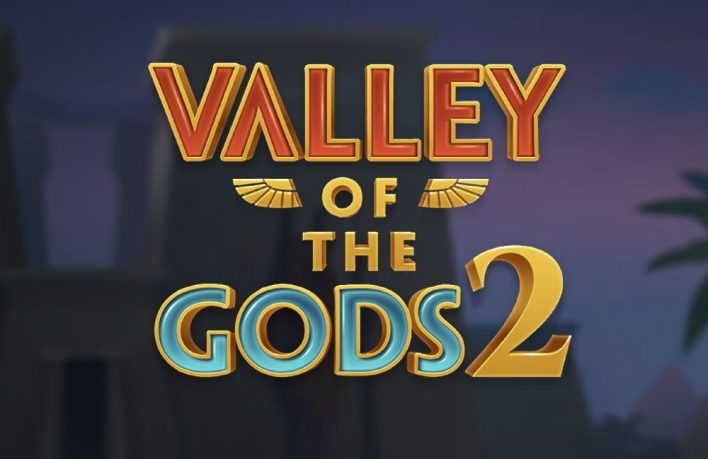 Valley of the Gods 2 is yet another exciting ancient Egyptian-themed video slot by Yggdrasil Gaming. The title is an upgrade of the original Valley of the Gods game, which was an instant hit when it was released in August 2017.

The revamped Valley of the Gods 2 game gives players 240 to 20,160 win ways, which is an upgrade from the 45 to 3125 paylines available in the original title. Those who have played the prequel will also notice little tweaks in the design, maths model, and bonus features. The highlights of the game include Re-spins, Symbol Collection, Win Multipliers, Wild Reels, and Extra Lives.

Valley of the Gods 2 Design & Layout

Valley of the Gods 2 is inspired by the deities of Ancient Egypt. The game board takes the form of a fallen pyramid, and it is set against a backdrop of a desert, pyramids, and palm trees. The background music is a dramatic Arabic tune. Valley of the Gods 2 Slot Game

Looking at the layout, Valley of the Gods 2 uses a unique grid with 6 reels and 3-4-5-6-7-8 rows. Each spin starts with 16 blocker symbols on the reels and the objective is to remove them by hitting wins until the rows are fully expanded. You can win on up to 20,160 paylines when the maximum column height is reached. The game symbols are Bastet, Sobek, Horus, Anubis, Ace, King, Queen, Jack, 10, and 9.

Cleopatra is the Wild symbol in Valley of the Gods 2. The icon appears fully stacked when the Wild Reel feature is activated. The game does not have a regular scatter symbol.

How to Play Valley of the Gods 2 Slot

Valley of the Gods 2 is optimized for all types of devices and screen sizes, which makes it possible for players to enjoy the game on desktop, tablets, and smartphones.

The slot uses coins with values ranging from R0.01 to R1, and you’re required to wager 25 coins per spin. This means that your bet per spin can be anything between R0.60 on the lower side and R100.00 on the upper side.

After setting your bet, you can start the game by clicking or tapping the Spin button. You can also use the Space key to start spinning if you’re playing the desktop version. There is an autoplay button as well, in case hitting play after every spin is too much work for you. You can use this feature to pre-set 10 to infinite automatic spins.

The machine pays when you land identical symbols on at least four consecutive reels, starting from the left.

RTP and Variance of Valley of the Gods 2

Valley of the Gods 2 slot comes with a slightly higher RTP of 96.30%. The volatility of the machine is medium to high level and its hit frequency is around 20%.

A Re-spin is awarded each time you hit a winning combination.

When you form a win, Scarab beetles spawn from the winning symbols and destroy random blockers to expand the rows.

The feature is triggered when the reel set is fully expanded. Instead of the churning out the regular Scarab beetles, winning symbols spawn Blue, Red, and Gold Scarabs, which are collected on the three bonus meters to the left of the screen. Collecting 5 Scarabs on each meter will trigger the following bonuses:

Win Multiplier: You will receive a 2x Win Multiplier when the Scarab Collection feature is activated. The Multiplier value grows by +1 every time you collect 5 Blue scarabs.Extra Lives: You will receive an extra life when you unlock the Scarab Collection feature, and an additional life every time you collect 5 Red Scarabs. The Extra Lives award Re-spins in case you don’t win on a spin.Wild Reel: Collect 5 Golden Scarabs to win a fully stacked Wild Reel. The Wild Reel is also Sticky, and it stays on the reels until it is part of a winning combination or until you run out of Respins.

Valley of the Gods 2 Demo Game