Orbs of Atlantis will easily stand out according to any regular player of Habanero slots. Habanero is known for developing slots that suit players of all budgets, that come with great RTP rates and that are, occasionally, so zany that they are radically different from everything else out there. That is unquestionably the case with the Orbs of Atlantis slot.

On the face of it, there isn’t much original about the theme of the slot. Another Atlantean slot you might scoff? However, take one look at the base game, its reel structure and how wins are formulated, and Habanero’s game will capture your attention. You’ll be eager to learn more about what the slot has to offer, and we’ll explain that to you right here in our Orbs of Atlantis slot review.

Krakens and Atlantean giants dominate the reels, backdrop and wagering menu in this Habanero effort. However, they aren’t that important. Your attention will immediately be drawn to the rune-encrusted reels while you ponder – how do wagers work? We’ll come to that shortly. First, we should look at how the game is played. 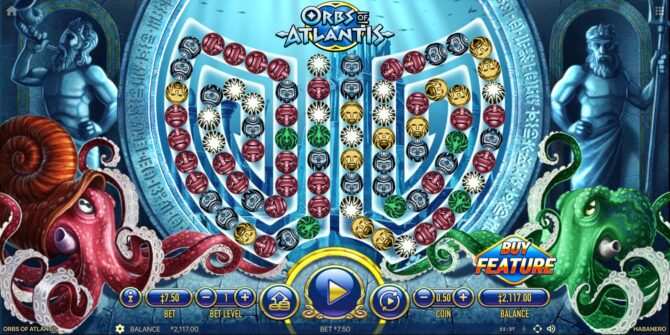 There aren’t really any reels of paylines of which to speak here. Instead, there is a circular dial, or semicircular dial, perhaps. This Big Reels engine essentially has two lines of symbols, weaving, curving, and swerving across the screen. As they snake their way around the screen, they contain forty symbols. Your job, as in any slot, is to get together as many identical ones as possible in succession. In this game, you’re going to need at least five identical symbols adjacently in any of the two lines. It’s a lot harder than it sounds.

The Key Details You Need to Know

As you’ve probably gathered, Orbs or Atlantis is not your ordinary, nickel-and-dime slot. This Big Reels engine is unique and clever. How does that affect your stakes, though? Below the “reels”, you’ll find several buttons that allow you to alter your stakes. These (coupled with “bet level” options) can see you wager anything from 0.15 up to 3,000.00 a spin. Those values will be commonplace to anyone who has played Habanero slots before.

The gameplay itself is deemed to be medium volatile. Given that, you won’t be surprised to learn that the non-progressive jackpot is worth around 9,300x a bet. Habanero reckons that the RTP of the game is a clean 96.60%. We’ll take their word for it, but upon playing the game, we didn’t see any real reason to disagree.

As bizarre as it is, Orbs of Atlantis does still have some commonplace slot features that make it easier to win. Moreover, these aren’t overly difficult to understand. You’ve got a cascading symbols mechanic in play, for instance. Anybody who has played a MegaWays slot will already be familiar with that.

In short, any win that occurs can see winning symbols removed from the reels and replaced by new ones. You’ll pocket increasing, progressive multipliers with each successive win you chain together. That means a 2x multiplier on the first cascading win, a 3x on the second, and so on. There is no cap here, so you could win epic sums.

You’ll also come across Fire Wilds. These can substitute for all standard symbols in the game, but they can also act as a paying icon on their own. Scatter symbols are immune from being replaced by wilds, but do trigger a free spin round.

You can start playing with ten to ten thousand free spins, depending on how many scatters you land. Multipliers on cascading wins are also worth three times as much, and after landing two or more cascades, you can prosper from random wild symbols to boot.

For those players that would like to get straight to the most exciting part of any slot game, you can buy an entry into the bonus feature for a price which is based on your bet level. There are three price options for a player to choose from.

Orbs of Atlantis – Our Verdict

Orbs of Atlantis is not like any Atlantean themed slot we’ve ever seen, and we must give it credit for that. The slot machine has dared to be different, and we think the format works. It is a little confusing at first, but once you start playing, you’ll realise that Habanero’s Orbs of Atlantis has as much to offer as any conventional MegaWays slot can do, only this is more original. Find more slot games from Habanero here.